Well, I survived my weekend of gemstone ID at the Gem, Jewelry & Mineral Show. Actually, I more than survived… I had a great time! I saw a variety of stones, and there were only one or two that I couldn’t firmly identify, both due to the stone’s setting not allowing me to get a good refractive index reading. (Definitely, loose stones are easier to work with.)

Among the many things I saw:

It was a blast to talk to people about their stones and jewelry, and make new acquaintances — stone dealers, and even a fellow gemologist! I’ll definitely do it again next year. 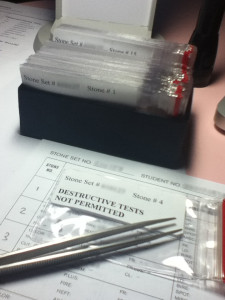 A few weeks ago, I started Gem Identification, the last class I need for my Graduate Gemologist degree. Over the span of the class, I will receive a total of 500 gemstones to analyze at home, using my own lab equipment. (20 stones per box, 25 boxes.) This culminates in the final, a 20-stone “all or none” challenge, where I have six hours to correctly identify 20 stones. “All or none” means exactly what it says – if I miss one stone, I fail. (I can retake it, but it will be with another box of stones, which will probably be completely different.)

I have the required set of equipment (10x loupe, refractometer, polariscope, spectroscope, dichroscope, tweezers, flashlight to stare into), plus a short-wave/long-wave UV lamp (which is great fun for making things fluoresce. Like diamonds. Or cool rocks.) The one piece of equipment that isn’t required, which I’ll probably get eventually, is a microscope. It has better indirect lighting (“darkfield” lighting), making it easier to see things inside the stone that are low-relief. (Some of those things can tell you whether the stone is natural or synthetic, for instance. Important stuff!)

I received my first box of stones on July 20. This box is used with the first several lessons, to help train you in using the various pieces of lab equipment. The stones in box 1 are chosen to show good/obvious examples of various things: a characteristic spectrum, or obvious features visible with magnification, or a specific reaction under the polariscope. After learning about the instruments, I analyzed and correctly identified all twenty stones. (The course gives a lot of helpful hints.)

After I “passed” this box, I sent it back, and am waiting for the next one to arrive. (Cue Jeopardy music.)

So far I’m really enjoying the course. I’ve always liked “lab” better than “lecture” — I guess I’m the hands-on type? — and it’s fun to get a stone to reveal it’s secrets…. I can’t wait to get my next box!

Phew, it’s been a while! I had it in mind to write “article”-type posts here (read: LONG), which I think may have been a mistake, as I’ve missed several “update”-type opportunities to post over the past few months. And now here it is, November, and interesting things have been happening, none of which I’ve told you about!

Here’s a sampling of what I’ve been up to, since July:

I started Colored Stones at the end of July, and Pearls at the beginning of September; I am nearly done with Pearls now, about halfway through Colored Stones (somewhat behind, in my original estimate; got bogged down with work this fall, which has curtailed the studying significantly.) I am going to Carlsbad next weekend to take the Colored Stone Grading and Pearl Grading labs. I plan to take the Gemstone Identification lab in late January.

In late September, I had the pleasure of meeting Tom Chatham, of Chatham Created Gems in San Francisco. Tom was very kind, extremely generous with his time, and quite patient with this googly-eyed gemology student (who spent the entire visit with her fingers in a bowl full of synthetic emerald crystals. Don’t judge me. You wouldn’t be able to resist them either!)

After my visit at Chatham, I made my way over to Lang Antiques and met some of their enthusiastic staff (hard not to be enthusiastic, working with their inventory every day!) I was happy to finally meet the awesome Barbra Voltaire, administrator and gem-goddess of GemologyOnline.com and the helpful GO Forums. (I visited Lang earlier in September, but she was off that day. I did spend some time ogling the stone to your left, which is probably my favorite piece in their inventory. Not sure, but I think I need to be queen of something before I can wear a ring like this.)

This visit, I spent some quality time with the piece to your right, a fabulous onyx and diamond locket from the Art Deco period. You really must go look at all of the pictures, because the inside is as beautiful as the outside, and the whole thing is just… dreamy. [swoon] Why is it, that I always like the expensive things? Maybe if you work with expensive jewelry every day, you get over it. (I’d like the opportunity to test that theory…)

For the record, Barbra was swooning over the locket, too.

Last but not least, a week from today, I will be joining the GIA Alumni Association’s Los Angeles chapter on a field trip to the famous Stewart Lithia Mine in Pala, CA. I’m going in a mine!! And then I get to sort through mine tailings and look for gems!! I’m ever so excited about all this. (In case you can’t tell.) I hope to have PILES of gems to photograph and post (but really, I’d be happy with just a small handful.)

There’s more to tell, but that will have to wait for the next post. Stay tuned!

When I first considered the Graduate Gemology program at GIA, I wasn’t sure how I felt about the diamond courses. Diamonds are a big part of the jewelry industry, naturally; but they weren’t exactly my favorite. Frankly, I wasn’t sure I’d like them much. How mistaken I was! I never could have dreamed how fascinating diamonds are; how beautiful and varied their inclusions, and how many colors they come in! The more I study diamonds, the more I grow to love them and the fascinating things found within them.

One of the first things I found interesting was that diamonds can burn. In hindsight this makes sense — after all, they’re made of carbon, and carbon burns — but until I saw a photo of a burned diamond, I hadn’t thought it possible. The diamond had survived a house fire, but came out looking more like an opal than the hardest substance known to man. I was also interested to learn about laser sawing, cutting and engraving, all of which work on the same principle (burning diamond, but on purpose.) It almost seems like a cheat, after centuries of struggle for even the crudest diamond fashioning. Technology marches on, I suppose.

I knew that diamonds frequently had inclusions, but I had no inkling that said inclusions could be tiny crimson garnets, or vivid green chrome diopside crystals… or other diamonds, for that matter. Thanks largely to the amazing microphotography of John Koivula, I was introduced to interior sights that almost seem fictional. Heart-shaped clouds of microscopic inclusions, unicorn-shaped feathers (breaks within the stone), gems within gems. I had no idea diamonds could be like this!

Another thing I was quite unprepared for was the range of colors diamonds come in. Some I knew about beforehand — it’s hard to escape knowledge of the Hope Diamond’s existence, I’d seen other lighter blue diamonds, pinks, yellows. But greens? Grays? Reds? Cognac and champagne browns? The range of natural color is staggering, and treatments expand the spectrum further! (I’m generally not “for” treatments or treated stones, but I acknowledge that some people want and like them. Don’t be such a snob, Danielle.)

Given all the colors I’ve just described (also seen in the poster image to your left, click for larger version), you’ll probably think me a weirdo for saying this, but I think the color diamond I’d like to own the most is gray. I’m a big fan of gray and silvery colors, and the thought of a gray diamond… I can hardly stand it. I want one. I’m also fond of the medium to dark steel blue colors, and I’d never say no to a pink diamond, or a cheerful yellow. (Actually, yellow is one of my favorite diamond colors. Really!)

The glamour of handling diamonds in person, in the five-day Diamond Grading Lab, wore off more quickly than I expected. This thrill was replaced by the frustration and pain that is the VVS and VS range of stones — “very very slightly included” and “very slightly included”. Or in other words, “there is something in this stone that is almost impossible for a student to find. Knock yourself out.” (I was going to add onto this that the teacher is secretly laughing at your anguish, but my teacher was extremely nice. And she liked the same Sanrio characters I do, particularly Chococat, which was a little odd. But I digress.) 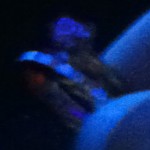 I’m fascinated by diamond’s tendency to fluoresce, although none of the diamonds I graded exhibited this phenomenon. (Half the stones in my channel-set wedding band, on the other hand, did — and I have a ghastly iPod picture to prove it! See?)

I completed my requirements for the Graduate Diamonds certificate last month, and came away with a greater appreciation for “that stone” everyone seems to want. No wonder diamond is so popular! Not only is it extremely hard (10 on the Mohs hardness scale, which is 140 times harder than corundum, hardness of 9), but diamonds are formed under extreme temperatures and pressures, and endure when many other things would crumble to dust. No wonder it’s a symbol of love and devotion! With a range of colors, clarity grades and sizes, there is truly a diamond to suit every taste. And I love them all.