My in-progress pictures of the first two projects of Fab 2 didn’t turn out, and I haven’t taken pictures of the finished results (such as they are.) For now, I’ll just mention them: the first project was a twisted wire ring of silver and copper, designed to be seamless (tricky, since you have to exactly match the twists where you cut), with both wires soldered shut (tricky, since the metals solder at different temperatures.) The second was a carved ring, starting from a square cast silver ring, which was divided into quarters and carved (filed) into a half-dome section, a fully round section, and a twisted pattern section.

Mostly I was occupied with the third project, which took about half the class hours to construct. Submitted for your approval: the Toggle Bracelet. 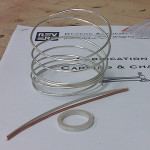 As hard as it is for me to believe, wearing it, the toggle bracelet started as that large coil of silver wire in the picture. (Yep, everything you are about to see came out of that coil. It’s crazy. Stay with me here.) We started by measuring out and setting aside a portion of wire, in order to construct the toggle clasp part of the bracelet.

We created a toggle bar from wire, attached it to a figure-eight connector made from a pair of smaller jump rings soldered together, and melted two other small jump rings to create a ball for each end of the bar. The loop was created from wire, soldered, and hammered into a round shape, then sawn back open so as to insert the other figure-eight loop that attached it to the bracelet, and solder it shut again. (You solder it shut initially so you can hammer it into a circle, which you couldn’t do if the connector was already on it.) 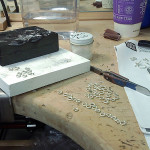 The rest of the wire, we coiled around a mandrel (steel rod) to form a long spring. This, we carefully sawed through, creating jump rings (or links, or loops.) A LOT of jump rings.

(Guess what a chain bracelet is made of? A WHOLE LOTTA JUMP RINGS, FOLKS.) 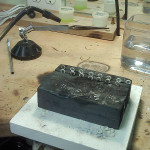 Since all the links on the chain needed to be soldered shut, we started by soldering half the jump rings shut. I can now say I can competently pick-solder. (All it means is, instead of laying a chip of solder directly on the seam and heating the piece until it flows, you melt the solder separately, pick up the solder on the point of your soldering pick — a pointed rod that doesn’t solder to anything, in a wooden handle so it doesn’t burn you — heat the piece, and touch the solder to the seam once the temperature is right. It sounds complicated, but it makes soldering jobs like this go very quickly.)

Once this initial batch is done, you start assembly, by taking an open jump ring, stringing two closed rings on, then soldering the open one shut to make chains of three. Then you connect two threes with a ring and make sevens, connect sevens to make fifteens, etc, until you have a finished length of chain. Somewhere in there, you stop and measure the chain against your wrist, and stop at a certain length — in my frenzy to complete the bracelet by the end of the class, I sortof forgot that step, which is why my bracelet is about an inch too long. [sigh]

Anyway, here it is. Hard to take a picture of a bracelet while you’re wearing it… 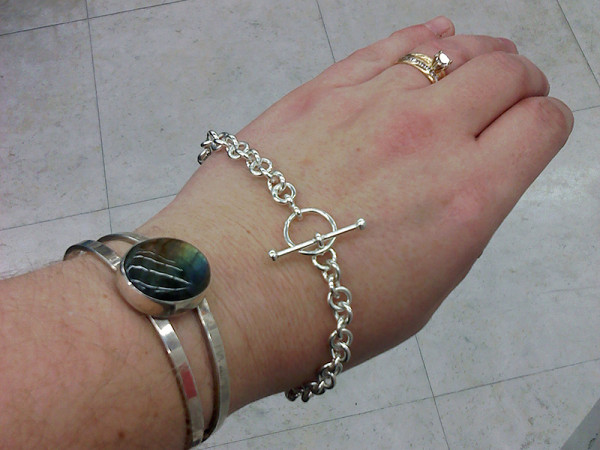