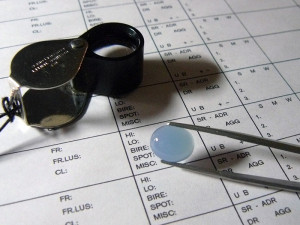 …100 more to go, for a total of 500 stones. Or, if you’d rather hear it in boxes, I’ve finished my 20th box, with five more left. I have one more in-hand, four yet to be delivered. I admit, reaching this milestone makes finishing Gemstone Identification seem more… feasible. I’ll have nearly six months to pass the final. (Hopefully, that’s way more time than I’ll need.) 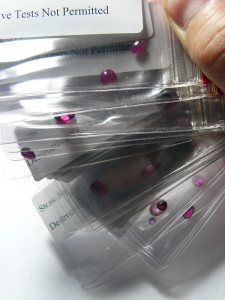 I’m in the home stretch now, which means the helpful stone-by-stone video tutorials have gone away. [sigh] I have one or two more boxes where I can miss up to one stone; the last few allow for no errors. Which is fine, that’s how the final is too (all-or-none).

Let me explain the final. You get twenty stones, and six hours to identify them. If you misidentify any stone, you fail. If you correctly identify a stone, but write the identification in the wrong part of the box, you fail. You can retake the final… but they send a different box of stones.

So that’s what’s in store for me, hopefully in late January. At this point, I just want to get it over with, get my Graduate Gemologist diploma and be DONE. It’s not lack of interest — actually, I really enjoy Gem Ident — but the homework “deadline” has gotten old, and I’m tired of worrying about it.

I’ll post again later this week with some new jewelry pieces, once I get a commission delivered. (My jewelry-making stint was unexpectedly brief, will resume in January. The short version: my work schedule sucks. The end.)